The FAA has recently released two databases showing registered commercial and hobby drones in the United States AKA the Major Drone Cities. The top spot on the Commercial Drone list is awarded to Menlo Park, California. Menlo Park is part of Silicon Valley and is home to multiple drone startups. Among this list, Los Angeles is ranked in the top 3, due to the high volume of Hollywood firms who are using drones to shoot scenes.

Top 10 cities with the most Registered Commercial Drones: 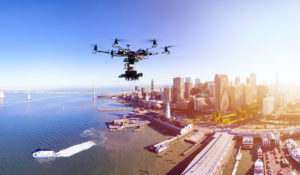 Top 10 Cities with the most Registered Hobby Drone Users:

It’s important to note that while these cities are major drone cities, these users aren’t necessarily allowed to fly over these cities. As a drone flyer, you have to be wary of No-Fly zones in order to avoid substantial fines. No fly zones include areas over national parks, military bases, and 5 miles within an airport. It is also important to fly your drone less than 400 feet above ground level and to remain clear of surrounding obstructions such as trees and telephone lines. Keeping your drone within visual range and outside of FAA controlled space, which includes a 5-mile radius around airports is also incredibly important. Lucky for you, there are plenty of maps available whether its on the internet or an app you can download on your phone which will help you avoid these areas and fly safely.

You can learn more about the top drone friendly cities here.